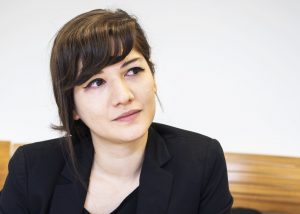 Lilian describes technology with such precision as few others. She has always been able to get down on the most diverse fields of knowledge. After studying English Literature, Modern German Literature and the History of Art in Munich, she worked for five years in a Munich PR agency. There, she was in charge of high-tech topics and leading providers of innovative building services. Today, she is particularly interested in how technology influences our lives and how it can be protected against abuse. In spring 2017, she consequently joined the Web&Tech team. Since then, her main focus has included topics such as networking, security, corporate IT and digitalization. At the same time, she supports the entire team and a wide range of clients with what she prefers to do both privately and professionally: writing. With her novel “Gold in den Straßen” (“Gold in the streets”), she won the Bavarian Art Award and the Tukan Prize of the Bavarian capital Munich. At the beginning of 2018 the second novel “Auster und Klinge” (“Oyster and blade”) followed, which she presents in numerous readings in Germany.